Help! Too Much Splash!

We have a bit of a problem in our neighbourhood. We are experiencing a flood. If you’re able to volunteer to help with sandbagging properties affected by flood waters, esp. on Darlington Bay in Keewatin, please call 547-2683 to register as a community volunteer.

As you know, we had a lot of snow last Winter. That wasn’t a problem. That was fun!

But then it melted…

And now it’s raining. We’ve had a lot of rain. Elizabeth says that to the south of us, they’ve had even more rain than we have.

Because of all the water coming north, important people in Ottawa and Washington are regulating the flow out of Lake of the Woods. A lot of people have summer mansions on Lake of the Woods: politicians, oilmen, shipping moguls, cosmetic giants, movie stars… We’ve heard that many of them don’t like it when their boathouses get wet inside. Elizabeth says that it’s more likely that the farmers at the south end of the Lake who live on flat ground that floods faster than where we are (it’s pretty hilly here) need help saving their fields. Thirty centimetres of water there floods much more land than it does here because the Lake of the Woods is on the Great Plains of North America there. And they have a lot of water down there this year. They need help, so the important people in Ottawa and Washington have opened up the dams along the way to us.

We decided to go to see the dam just up the river from the estate on Tuesday. It’s fully open now. Compare the levels on either side.

Elizabeth laughed when she saw the “For Emergency Call Oshawa Operating Centre” sign. Here’s why…

providing quite a cumulative effect!

And guess where all that water is headed?

We followed it to the mouth of our Bay, where the Darlington Bay Bridge is now. This is a ‘new’ bridge. The old Bailey Bridge that Elizabeth had to walk over on her way home from school many, many, many dog years ago [careful, Stella…] Would be under water now, like the big sign that you can just see the top of in this photo: 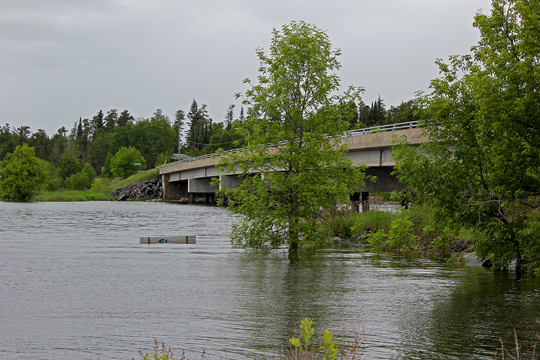 Elizabeth and her best friend and some other kids set up a lemonade stand here when this bridge was being built. It was a gold mine – construction workers and all the people waiting for their turn to go over the single lane Bailey Bridge were always thirsty (few cars had air conditioning back then…)   -:oO=

There goes all that water, upstream into Darlington Bay. 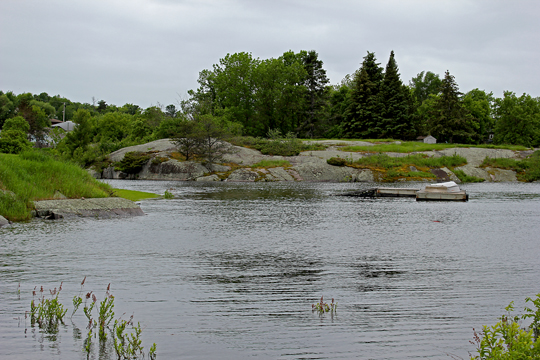 Other people have the dock thing figured out, but might be wondering if they should maybe have built their house on stilts?

Elizabeth’s dad was pretty smart. He built their house up on a hill on a big piece of bedrock. And we don’t have a dock. We just have a canoe we can slide in and out of the water whenever we want. That’s not to say we don’t notice the high water, though. Right now it is about 4m above normal levels (That’s about 13 feet for our American friends).

Our trail is flooded. I like to wade/swim over, but Elizabeth is staying on this side for now.

Our little bay and creek are really backed up. If you look, you can see the end of our point is now an island. Lots of debris floating in, too. Some two-leggers are very careless with their garbage. Elizabeth will have to go and clean it all up when the water goes down again.

Around Town, Dog Rants, On the Campbell 'Estate'