I told you we’d show you The Windows when Bonnie came back with the ‘wee man’. Sadly, Bonnie didn’t find a ‘wee man’. We’ve since been told they are very hard to find. That’s what makes Leprechauns so special. The are very rare. Anyway, Bonnie bought two fake ones that don’t fool anyone but look nice in the display. So, I made Elizabeth stand out in the rain on Tuesday and take a photo of The Windows for you. She wanted to wait until she’d had a chance to buy something called a polariser for her camera lens. I wouldn’t let her. A promise is a promise and I promised. So here you are: 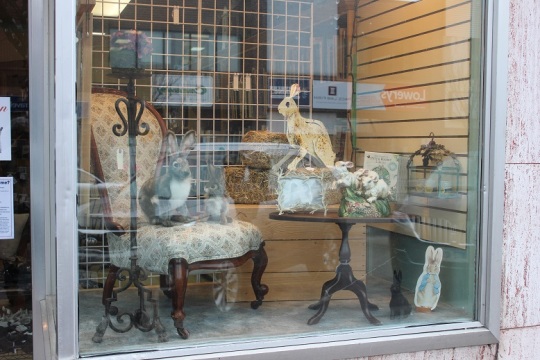 Bonnie has fixed her window up for Easter. They won’t let me play with the furry bunnies. They aren’t real, but they look more real than the ‘wee men’. 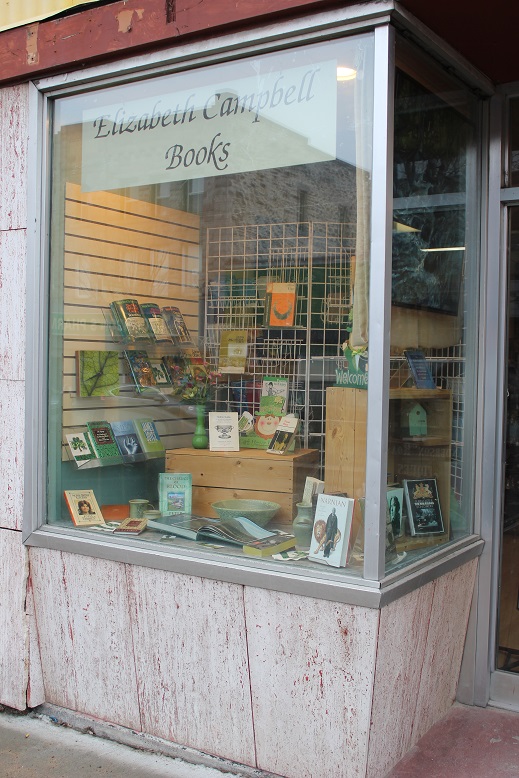 You see what I mean about ‘wee men’ being hard to find? There are two Leprechauns in there.

So now The Windows are done.

That doesn’t mean we take a break, though! Oh, no. Look at Bonnie. She’s found a new way to eat chocolate:

She’s all excited about setting up her new room in time for the summer season, when all the tourists arrive.

Bonnie’s new room – we haven’t named it yet – used to be our Writers’ and Reference Room. It used to look like this:

This was the only BEFORE picture Elizabeth could find.

Now, that same area of the Room looks like this:

The rooms look so much bigger and more alive in the lighter colour.

Bonnie hasn’t finished filling it up yet; she’s still adding features and product. I’ll get Elizabeth to show you more of the new room when it’s complete.

We are going to work on the Darlington Room (for hand-crafted goods) later this week, I think. Bonnie will bring her chocolate eater in there first, then Elizabeth will implement some of her ideas. I hope they’re good ones this time…

Elizabeth Campbell Books, On the Job

Here I am at work once more. I needed a rest after the weekend. There was SO much going on, and I always seemed to be getting in the way (that never happens!). I even got stepped on. Ouch. But I was a good sport about it since it didn’t hurt too much.

Saturday, The Foyer Apses, otherwise known as The Windows, underwent a face-lift. If you recall, the front of the building used to be Extreme Tanning Salon. Their decor was also Extreme Tan – Chocolate Brown in fact – everywhere. That colour just sucks the life out of the place. Two-leggers would walk by our shop and it was so dark inside that they’d think we were closed. That meant they’d keep on walking instead of coming in and buying me some dog food (Where did you think all our earnings go? Vacations in the Caribbean? You’re thinking of Bonnie. She doesn’t have a dog.).

Last fall Elizabeth took out the flooring in the window and had some linoleum laid instead. I like it. It’s grey. It looks like my sleeping rock in the summer. But she left the walls Chocolate Brown. I couldn’t figure out why when she had held a whip over Bonnie getting her to hurry up and paint The Foyer. But on Saturday, I found out. She needed to sell enough books to both feed me AND hire a carpenter and buy the special wall board for a renovated window wall. Then Elizabeth and I took a day off. When we came back, Bonnie had painted the windows. Now they match The Foyer, and they look much prettier!

That special board means Elizabeth and Bonnie can build better and more interesting displays in the windows now. And it just looks so much more… AAAHHH… in a tail thumping kind of way.

Bonnie has gone to look for a “wee man” to help watch Elizabeth’s Window while she and I are at home. When he comes, we’ll take a photo and post it so you can see what the window looks like when there’s stuff in it. Like books. And a “wee man”.

I’ll have another episode ready for you in a couple of days, so get your popcorn ready.

Elizabeth Campbell Books, On the Job